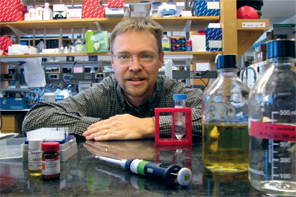 With MDA’s support, scientists have made significant progress toward understanding and treating the inherited myopathies.

Not long ago, many people with myopathies that cause temporary symptoms were told they had psychological problems or were accused of being lazy. MDA-funded scientists helped show that these are treatable, physiologic medical conditions.

In the 1990s, researchers discovered that ion channel defects were at the root of several myopathies; that defective filament proteins give rise to nemaline myopathy; and that defects in or loss of a previously unknown protein called myotubularin cause X-linked myotubular myopathy.

More recently, MDA-supported researchers have found that centronuclear myopathies encompass a larger group of diseases than just X-linked myotubular myopathy, and that these often have a better prognosis than the X-linked disease.