A large, multinational study to identify genetic risk factors associated with amyotrophic lateral sclerosis (ALS) has found two DNA sequences on chromosomes 9 and one on chromosome 19 that are significantly different in people with and without the disease and may contribute to its development. 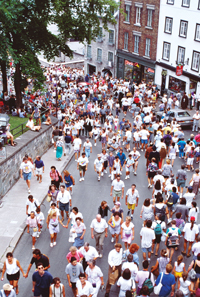 The identified DNA regions on both chromosomes contain genes for biological processes that could have an effect on the disease.

Gene variations in the chromosome-9 region have been associated with ALS in combination with the cognitive disorder frontotemporal dementia.

For the first time, a specific DNA variant on chromosome 19 was identified as having a possible ALS association. The investigators say the variant is in the same DNA region as a gene that helps regulate transmission of signals between nerve cells and between nerve and muscle fibers.

Leonard van den Berg and Roel Ophoff at the University Medical Center Utrecht in the Netherlands coordinated the study team, which published its findings online Sept. 6, 2009, in Nature Genetics. MDA supported Simon Cronin and Orla Hardiman at the Royal College of Surgeons in Ireland for portions of the study.

Various mutations in the SOD1 gene on chromosome 21 are responsible for some 1 percent to 3 percent of all ALS cases. Mutations in several other genes have been found to cause ALS in small numbers of patients.

The cause of the vast majority of ALS cases is unknown, although genetic factors are widely believed to contribute to disease susceptibility and perhaps to its time of onset and severity.

The new findings represent the latest in a series of "whole-genome" (all genes in a person's makeup) association studies, also known as "genome-wide" association studies. This type of study looks for and sometimes finds small variants in DNA sequences that are significantly more common in people with ALS.

This latest study included an analysis of all the DNA from an initial group of 2,323 people with ALS and 9,013 unaffected people, followed by further investigation of potentially significant findings in another group of 2,532 ALS patients and 5,940 people without the disease. The study subjects were from the United States, the Netherlands, Ireland, Sweden, Belgium, the United Kingdom, France, Poland and Germany.

A surprise discovery in the new study is the association of a variant in a gene known as UNC13A on chromosome 19 that's more common in people with sporadic ALS than in unaffected subjects. Since the UNC13A protein made from the gene is known to play a role in the transmission of signals among nerve cells and nerve-to-muscle signals, its influence on ALS development seems like a potentially productive research lead.

Also surprising and potentially valuable was the discovery that genetic variants on chromosome 9 that are known to be linked to a form of familial ALS accompanied by dementia also may be linked to sporadic ALS. The investigators found two specific variants in this region that are significantly more common in sporadic ALS patients.

Among earlier whole-genome association studies conducted in ALS are an MDA-supported study by the Phoenix-based Translational Genomics Institute (TGen) and another by the U.S. National Institutes of Health (NIH) in Bethesda, Md.

The TGen study suggested genes associated with the connections between nerve and muscle fibers might be different in people with and without ALS. However, critics charged the statistical methods used in this study might not have identified true differences between the two groups.

The NIH study investigators found no significant differences between ALS and non-ALS genomes.

The differing results from the multiple whole-genome association studies in ALS have led to the conclusion that there may be no "smoking gun" to be identified from this type of analysis. Study results support the idea that ALS is not one, but many, diseases, with differing combinations of causal factors. This understanding, and the leads provided by the findings from each study, are important for investigators to take into account as they work to develop treatments.