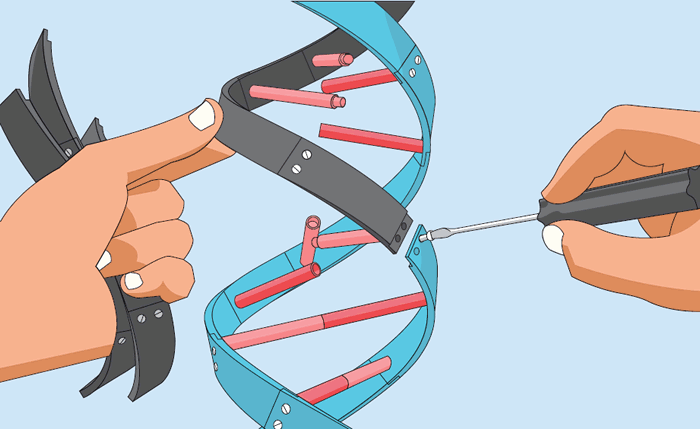 Researchers look to treat genetic disease at its source

Until the 1980s, little was known about the cause of any neuromuscular disease. In 1986, MDA-supported researchers identified a single gene on the X chromosome that leads to Duchenne muscular dystrophy (DMD) when it is mutated (flawed). In 1987, the protein associated with that gene was identified and named dystrophin. Lack of the dystrophin protein in muscle cells causes them to be fragile and easily damaged.

Many more discoveries have been made since then, and scientists have identified thousands of genes that, when mutated, cause disease in humans. Identifying the gene that causes a certain disease — and how the mutation leads to disease — gives hope for treatments and cures where none existed before. Without knowing the root cause of a disease, medical professionals can only treat the symptoms. But when the gene causing the disease is identified and the mechanism behind the disease is understood, researchers have a potential target at which to aim treatments and cures.

In recent years, drug developers have been able to pair the ever-expanding pool of gene identifications with advances in technologies for delivering gene-targeted therapies. These therapies hold a great deal of promise for treating neuromuscular diseases, including many of the rare diseases under MDA’s umbrella.

It Starts With Genes

Genes are made up of DNA. Some genes contain instructions for making proteins that the body needs to function properly.

Most neuromuscular diseases are caused by genetic mutations. These mutations can result in the destruction, malfunction or absence of proteins needed for muscles to develop and function properly.

Gene-targeted therapies seek to treat a genetic disease at its source. A therapy may do this by replacing a mutated gene with a working gene, repairing a flawed gene or altering how a gene is controlled.

“Gene therapy is an opportunity to directly impact patients with neuromuscular disease,” says Barry Byrne, M.D., Ph.D., director of the Powell Gene Therapy Center at the University of Florida and a former MDA grantee. “Replacing the causative gene for a given condition seems to have a major effect where conventional therapies may not have an impact.”

Currently, the most exciting area of gene-targeted therapy is gene-replacement therapy, which aims to introduce a working copy of a missing or defective gene into target cells.

In gene-replacement therapy, scientists create the new gene in a laboratory and then package it in a delivery vehicle called a vector, which transports the gene into the nucleus of targeted cells. The cells can “read” the code carried within the new gene and produce the needed protein.

An area of intense focus for researchers is the vector, which can determine whether a replacement gene integrates itself into the cell’s existing DNA or remains separate inside the nucleus.

Many scientists are working with adeno-associated viral (AAV) vectors. These small viruses don’t cause diseases in people, but they can insert genetic material into cells. AAVs are designed to allow a new gene to enter the cell nucleus and work on its own, without integrating into the cell’s DNA, where it can trigger unintended consequences, such as other diseases.

The downside of not integrating into the cell’s DNA is that as cells divide, the transferred gene — and its effects — are gradually lost.

In contrast to AAVs, lentiviral vectors insert their genetic cargo into the target cell’s DNA. This means that the new gene will be passed on as cells divide, making lentiviruses useful when targeting tissues that have high rates of cell turnover.

“The most promising current approach for gene therapy to treat neuromuscular disease is the use of AAVs,” says Michele Calos, Ph.D., an MDA grantee and immediate past president of the American Society of Gene & Cell Therapy. “But there are limitations to the AAV approach, such as size limit for the therapeutic gene and many patients’ pre-existing immunity to AAV, so additional approaches are needed.”

Working with technologies only dreamed of in the past, scientists are developing more ways to target gene defects. Some strategies using antisense oligonucleotides (ASOs) to alter the genetic machinery in different ways have made it to late-stage human clinical trials or even through regulatory approval in the United States and/or Europe.

One promising way of using ASOs is through antisense gene therapy that aims to “turn off” a defective gene’s effect. This involves altering a strand of DNA or RNA to effectively tell cells to ignore part of the genetic instructions during protein manufacturing. This is called exon skipping and can cause cells to produce shortened but functional protein.

Nonsense mutations are changes in DNA sequence that introduce a premature stop codon, which acts like a cellular stop sign, causing cells to stop partway through the protein-making process. This results in shortened protein that does not work because it is missing critical parts. With stop codon read through technology, cells can be coaxed into running the erroneous stop sign, allowing them to produce functional protein.

Gene editing permits scientists to go into a cell and delete or replace a targeted section of DNA in the mutated gene. This approach allows for a precise method of targeting genetic mutations, but because it permanently changes the genome, it raises greater safety concerns.

Currently, gene editing is usually done ex vivo. Eventually, scientists hope to use viral vectors to transport tools, such as CRISPR–Cas9, into the body to edit genes, but more work is needed to determine if this is safe in humans.

Research and development of gene-targeted therapies are being conducted with a sharp focus on patient safety, but there are still risks associated with efforts to alter a person’s genetic code. Some of the risks are:

We are in an unprecedented era of therapy development for neuromuscular diseases.

“For the first time, we have seen the development of genetic therapies in the last few years, and we’ll likely see more successful applications of new gene therapy technologies in the near future,” says MDA grantee Kleopas Kleopa, M.D., professor and senior consulting neurologist at the Cyprus Institute of Neurology and Genetics, Cyprus School of Molecular Medicine, in Nicosia, Cyprus.

Over the last few decades, MDA-supported researchers have discovered the gene-causing mutations for many neuromuscular disorders, developed and refined gene delivery tools and methods, and devised creative and groundbreaking solutions to the problems created by genetic defects.

Those efforts have contributed to the FDA approval of Zolgensma, as well as approvals for other types of gene-targeted therapies, such as Spinraza for SMA and Exondys 51 for DMD. Many more experimental therapies are in clinical trials for diseases including limb-girdle muscular dystrophy (LGMD) and Pompe disease.

“As we learn more from the ongoing preclinical and clinical studies, the approaches for treating these disorders will continue to improve,” Dr. Kleopa says.

The outlook for gene-targeted therapies is hopeful, as a robust pipeline of gene therapy candidates and new technologies could soon benefit individuals and families living with neuromuscular diseases.

What Does That Mean?

Here is a guide to terms commonly used in discussing gene-targeted therapy.

Antisense oligonucleotides: Small sections of DNA or RNA that can bind to specific molecules of RNA. This blocks the ability of the RNA to make a protein or work in other ways.

CRISPR-Cas9: A tool used to “edit” pieces of a cell’s DNA. Also called CRISPR, this tool uses a specially designed RNA molecule to guide an enzyme called Cas9 to a specific sequence of DNA. Cas9 then cuts the strands of DNA and removes a small piece, causing a gap where a new piece of DNA can be added.

DNA: A long molecule that carries a cell’s genetic information.

Exon skipping: Exons are the sections of DNA that code for proteins. In exon skipping, RNA is spliced together in a way that causes cells to “skip over” an exon during protein production.

Genes: Segments of DNA that act as blueprints for making proteins for virtually every function and structure in the body.

Gene-targeted therapy: The introduction, removal or change in the content of a person’s genetic code with the goal of treating or curing a disease.

Genetic mutation: A flaw in a sequence of DNA that alters gene function.

Genome: The sum of all genes in the body.

Nonsense mutation: Also called a stop mutation, this is a flaw in a sequence of DNA that causes cells to stop producing a protein earlier than expected. This results in a shortened, usually nonfunctional protein.

Proteins: Complex molecules that play many critical roles in the body. They are required for the structure, function and regulation of the body’s tissues and organs.

RNA: A molecule that is chemically similar to DNA and carries a matching code. Messenger RNA (mRNA) helps cells translate the information found in genes into corresponding proteins.

Stop codon: A sequence within an mRNA molecule that signals cells to halt protein synthesis.

Vector: A delivery vehicle that carries new genes to cells. Vectors may be genetically disabled viruses, such as adenovirus, or non-viral vectors, such as liposomes.

MDA recently launched our Gene Catalyst Initiative (GCI), a multi-faceted effort to ensure that MDA families benefit from all the promise genetic medicine has to offer.

The GCI comprises a number of initiatives:

“This important initiative builds upon MDA’s long history of supporting research aimed at the development of genetic medicines, with an appreciation and understanding that the best way to move toward treatments and cures is to understand the root cause of the disease and target that as closely as possible,” says Lianna Orlando, Ph.D., MDA’s interim head of research.

Through the multi-pronged approaches embodied in the GCI, MDA will continue to work with its large community of partners — including families, donors, researchers and clinicians — to keep up the momentum and pave the way to more treatments and cures.

Amy Madsen is a science writer and frequent contributor to Quest.