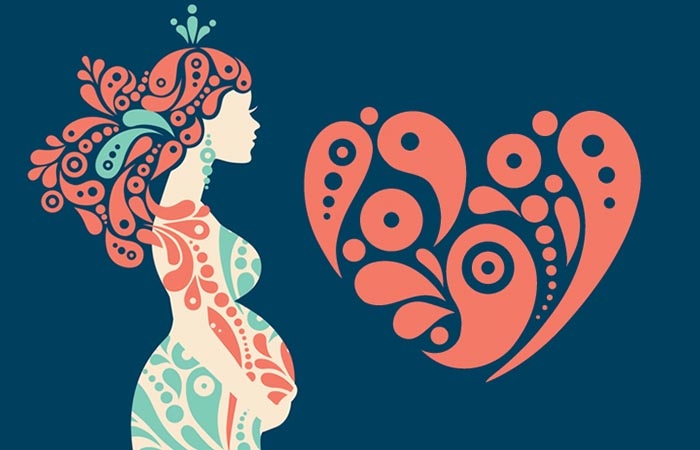 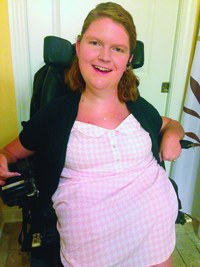 Katrina Gossett, 29, has only had one gynecologic (pelvic) exam in her life, and it’s not an experience she’s eager to repeat. Gossett, who has spinal muscular atrophy (SMA) and uses a power wheelchair, is an Indianapolis attorney who is used to taking charge of things. But the pelvic exam she had a few years ago was daunting to say the least.

Just getting on the examination table was the first hurdle.

“They brought in a lift and had two guys operating the lift,” Gossett recalls. “They didn’t see me naked, but it was awkward. They put a sling under me, and it took 10 or so minutes to get me onto the table. Then I had to explain that I couldn’t use the stirrups and that I had to have someone hold my legs. My mom and a nurse held my legs, and they did the exam.”

Although the American Cancer Society recommends regular Pap smears (an analysis of cells from the cervix, obtained during a pelvic exam) for women starting at age 21, Gossett hasn’t had this kind of testing; the lingering bad memory
of her last exam is that strong.

Gossett is too young for mammograms — recommended for women starting at age 40 — but she’s not sure why her primary physician hasn’t done any kind of breast exam. “It may be because I can’t get on the table, so maybe she doesn’t think about it,” she says.

Carol Abraham, 53, is a retired occupational therapist living in Twin Lakes, Wis. She has limb-girdle muscular dystrophy (LGMD) and uses a power wheelchair.

Abraham, now approaching menopause, has noticed changes in her body and has sought and received medical attention for them, but she has had to be assertive about getting it. (One notable exception, Abraham notes, is Wendy Peltier, her former MDA clinic physician in Milwaukee, and the special women’s clinic to which Peltier referred her, which has been extremely helpful.)

“Very few clinics have an exam table that is low enough for transfer from a wheelchair,” Abraham says. “I frequently have to request a special procedure room, and the examination is more of a challenge than it would normally be. I know that when I call to schedule something, I need to warn them that I’m in a wheelchair, that I need to be sure that I am in a room with a lower table, and that my husband will be coming to help me.” 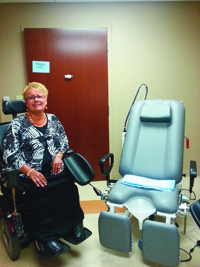 If her husband isn’t available, she requests extra assistance from the staff and, when possible, a mechanical lift. “You can bring your own lift,” Abraham says, “but it’s a huge hassle.” (Portable lifts are sold and may be a solution for some women.)

Mammograms, she says, have not been a problem. “As long as I can position myself close enough to the machine and as long as the arms flip back on my chair, all I need is someone to help lift my arms for positioning,” Abraham says. “But the positioning takes extra time, so I request a double time slot for my mammograms.”

Abraham’s MDA clinic referred her to the Women’s Incontinence and Sexual Health (WISH) clinic at Froedtert Memorial Lutheran Hospital in Milwaukee, where she underwent testing and treatment for hormonal changes, has learned to do some exercises to help with bladder function, and has even felt free to ask intimacy-related questions.

“I know it’s something that is not approached often,” Abraham says, “but sexuality and intimacy are important aspects of a healthy life, regardless of a disability.”

Katrina Gossett believes there is still a widespread assumption that women with neuromuscular disorders are not sexual or even that they shouldn’t be sexual. “I think it’s just a damaging viewpoint throughout our culture,” Gossett says, “and it has permeated the medical field and everywhere else. It’s very damaging to a woman’s self-esteem,” she says. “I’ve even heard horror stories about women being criticized for taking the risk of having sex and possibly getting pregnant.”

However, she does think things are changing, if slowly. “Doctors are starting to change their views, as people with disabilities are getting out in the world, doing things and having relationships,” Gossett says. “I think doctors are starting to realize that these are legitimate issues that should be addressed, but there are still a lot of professionals who have not figured it out.”

Women with neuromuscular disorders have the same needs for routine screenings, contraception and pregnancy-related care as women in general, and they also may have additional needs.

A recent study suggests that women with type 1 myotonic muscular dystrophy (MMD1 or DM1) may be at increased risk for gynecologic cancers. Women with neuromuscular disorders have a higher-than-average rate of complications related to pregnancy and childbirth, but women with MMD1 are particularly vulnerable to these issues.

In addition, weak pelvic muscles can cause the bladder, uterus or rectum to slip downward, causing pain, constipation and urinary urgency, and weak abdominal muscles can make defecation difficult.

Women who are mostly immobile have a higher-than-average risk of blood clots, something that physicians need to consider when selecting an oral contraceptive medication.

“Every woman needs a gynecologist,” says Ericka Simpson, director of the MDA Clinic at Houston Methodist Neurological Institute. “The neurologist or the primary care physician should direct the patient to people in the field who have experience with women with neuromuscular disorders. I’m always looking for those who have taken care of patients with these diseases, and I send my patients there.”

However, she says, “We all could do a better job. Gynecologic exams and mammograms are a vulnerable experience, and a lot of our patients just don’t do them.” 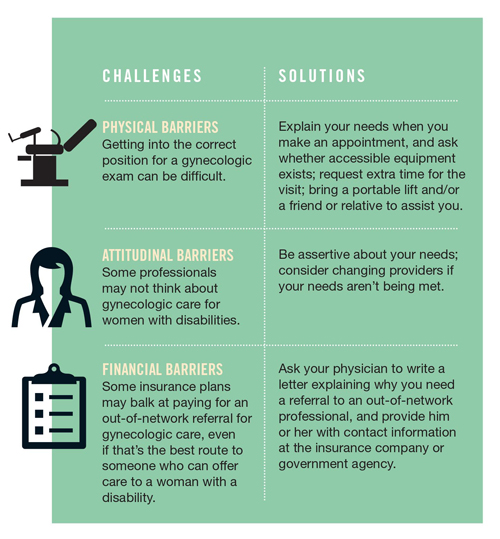 Emma Ciafaloni, who co-directs the MDA Clinic at the University of Rochester (N.Y.) Medical Center, has similar views. “You wonder if access to care is as good for women with neuromuscular disorders,” Ciafaloni says. “Depending on where you are, this might be a big issue. As neuromuscular disease specialists, we should routinely ask women if they’re getting gynecologic care. I’m now doing it more and more. I had assumed that the primary care physician was doing it, but maybe assuming is not the best way.”

Be your own advocate

Carol Abraham emphasizes that women need to be assertive about their health care.

“You need to be your own advocate,” she says, whether it’s getting extra help with positioning for a pelvic exam or mammogram or asking for advice about intimacy.

She’s especially concerned about women who say they’re avoiding routine screenings because of physical or psychological discomfort. “Yes, it’s more of a challenge for the examination,” Abraham says. “But when you look at the benefits of preventive measures, I would much rather go through that discomfort than face the challenges that I would have to deal with if I developed cancer. When put in that perspective, it’s a very small price to pay for the prevention you are seeking.”

For more about pregnancy and childbirth, read Great Expectations: Pregnancy and Childbirth with Neuromuscular Disease.