A Little Piece of the Future 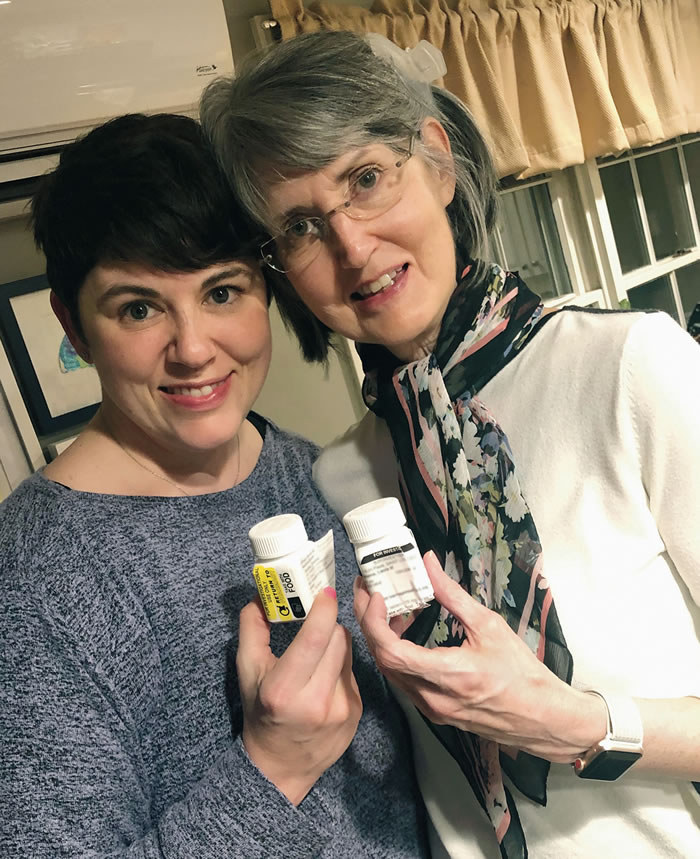 Chelsea Moeller and her mother, Laura, both participated in the phase 2b Fulcrum ReDUX4 clinical trial last year.

My experience participating in an FSHD clinical trial

Of the 80 patients in the phase 2b international Fulcrum ReDUX4 clinical trial, my mom and I are two. To the trial, we are data — nameless numbers in different age groups from states separated by half the country that met all of the eligibility requirements. To us, we are doing something together to advance science on behalf of everyone living with facioscapulohumeral muscular dystrophy (FSHD).

The ReDUX4 trial is testing whether the drug losmapimod will suppress the expression of the troublemaking DUX4 gene. In the human embryo, DUX4 has a brief starring role in igniting the development process. Then, it’s supposed to quit and never be heard from again. In those with FSHD, it doesn’t quit, and proteins run amok, attacking and killing healthy muscle tissue. It’s a degenerative slope that alters lives.

When the trial enrollment opened, I felt urgency with an edge of avoidance. This would be my first clinical trial. I wanted it, and I didn’t.

There were a lot of unknowns — whether I would qualify, whether there would be a slot left if I did, whether I could meet the demands of the trial. It also meant acknowledging my condition and its trajectory in a way I had yet to do. With so many aspects out of my control, I resolved to let eligibility be the answer. If they said yes, so would I.

To be eligible for the trial, my muscles had to be in an active state of decline with enough muscle-to-fat ratio to assess the presence of DUX4 protein in tissue samples. My screening visit was at the University of Massachusetts (UMass) Medical School in Worcester, a three-hour drive from my home in central Maine. It involved a battery of push-pull strength evaluations and an MRI.

Eleven weeks after my first conversation with the trial coordinator, I was confirmed eligible. Four weeks after that, I traveled to Maryland for my first mus­cle biopsy at the Kennedy Krieger Institute, where they were accustomed to performing a less invasive small-needle biopsy. The beginning of the trial was a dizzying order of operations including the coordination of a million moving parts: the trial schedule, where things were often due within a set window of time; the UMass team’s schedule, as well as mine and my husband’s; and the availability of diag­nostic equipment.

It quickly became evident that the UMass clinical team and I were learning together. I was one of two patients enrolled in the trial at this site. The trial required that all sites follow specific instructions from Fulcrum, which they often read from a notebook while completing. It felt competent while also feeling very "trial."

ReDUX4 is a double-blind, placebo-controlled, multi­center study. Participants were randomly assigned to take pills that either contain the drug or a placebo. No one knows who’s getting what until the very last participant has com­pleted the trial and the data analysis, which is happening now, is done. The hope is that results show the drug is more effective than the placebo.

In addition to taking two pills twice a day and logging it into a phone app, the trial involved two muscle biopsies, two partial-body MRIs, check-in visits at specific intervals, blood draws, EKGs, strength assessments, surveys, and physical therapy evaluations. The visits were intended to be spread out over 48 weeks.

Three months into the trial, the coronavirus pandemic threw a wrench in things, and Fulcrum pivoted: in-person visits were replaced with phone calls and backyard blood draws by mobile phlebotomists, and medication showed up by courier in cryo­genic-looking packaging with timers and temperature control.

I was thankful the pandemic didn’t fully disrupt trial progress. I was thankful I didn’t have to choose between continuing the trial or taking COVID-19 precautions. In fact, my mom and I have had a real sense of gratitude through­out this entire process — grateful to be part of it and for the many people we’ll never know who are devoting resources to finding treatments; grateful to our doctors, trial coordinators, physical therapists, and MRI technicians who were kind and calm, even with all the changes. We were treated with respect and appreciation.

In addition to gratitude, my mom and I also felt our privi­lege throughout. My experience showed me that clinical trials often are a thing for privileged people — people who can accommodate the appointments, travel, and lack of control over what happens and when. I could take off work every few weeks for the overnight trip to UMass. I could travel to Mary­land for a biopsy. I had people to watch my daughter when I wanted my husband by my side, and I’m still independent enough to travel alone when needed.

Fulcrum worked to remove as many barriers to participa­tion as possible, paying for travel and accommodations and providing stipends for appointments. Even so, I can see how trial participation is daunting, because nothing else pauses while you fight for futures like your own.

From where I sit, participating in this and, I hope, future trials is the least I can do in the face of a condition that will increasingly let me do so little.

I stopped speculating about whether I was in the placebo group early on. On the other side of those 48 weeks and a couple of months into the "open label" portion of this trial, where all participants can opt in to taking losmapimod, I am not the Hulk. I don’t feel like I’ve gotten a lot worse in the last year either, which could be the drug working, or it could just be the disease doing its erratic, slow dance of deterioration.

If you have a progressive condition, though, you know that pausing the process preserves a little piece of the future. Real or imagined, losmapimod or not, I’ll take it.

Chelsea Moeller, 39, was diagnosed with FSHD in 2012. She lives in Maine with her husband, 4-year-old daughter, and Newfoundland dog. Her mother, Laura, lives in the Midwest, and the two are happy to have each other as they travel the long and winding road of FSHD.