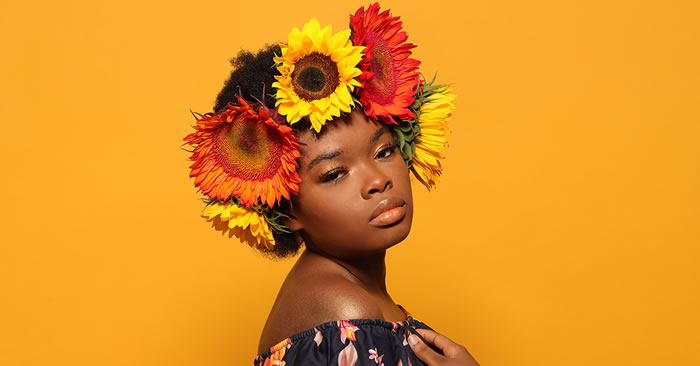 Queen, who lives with Bethlem myopathy

When it comes to body positivity, perspective matters. These advocates are changing how the world sees them — and how they view themselves, too

When MDA National Ambassador Keisha Greaves was diagnosed with limb-girdle muscular dystrophy (LGMD) as a college student at Framingham State University, in Massachusetts, her lifelong confidence in her body plummeted.

Studying fashion design and merchandising made the situation especially tough. She was used to looking a certain way and following fashion trends that certainly didn't celebrate different kinds of bodies. At first, she didn't want to share what was happening — for example, she told people she was walking with a cane because of a sprained ankle. It wasn't until nearly four years after her diagnosis that she decided to acknowledge her condition publicly.

"I wrote my first blog about having muscular dystrophy and how it felt to be in my body," recalls Keisha, who lives in Cambridge. "That's when I realized I didn't have to leave fashion design; I could put it to use."

In developing her own clothing company, Girls Chronically Rock — the name is a nod toward meeting the challenges of living with chronic illness — Keisha came to embrace the body she has, not the one she left behind. She focuses on making clothing that helps people feel positive and empowered.

It hit home just how much power Keisha's attitude has when she received a message from an Instagram follower who said she had contemplated taking her own life. Seeing Keisha's passion for embracing her body and helping others do the same, however, helped her leave those thoughts behind.

"I understand, because there are times I'm not in the best headspace," Keisha says. "I cried when I read that, because how many people feel defeated by what's happening in their bodies? Getting to a positive place isn't easy. But it's worth it."

What does "body positivity" mean? There's no standard definition, which means the phrase can feel negative to some and uplifting to others.

"It's a loaded term, and often signifies an unhealthy fixation on our bodies and the way they're perceived by others," says Bill Crossland, a filmmaker in Philadelphia who has had a general diagnosis of muscular dystrophy (type unknown) since he was 2 years old. "I tend to view the subject in terms of self-acceptance. We can't force everyone in society to find our bodies attractive or praiseworthy, but we can learn to accept the things about ourselves we cannot change and focus on self-improvement in other areas."

When Bill was a teenager, he sometimes struggled with feelings of bitterness and inadequacy due to the physical effects of his condition, which include severe muscle weakness, scoliosis, and limited mobility. That set him apart from his peers and affected how he saw himself.

But like Keisha, he grew to appreciate his own perception of his body, rather than focusing on what others may think. In his career, he's brought that perspective onto the big screen.

Bill's first feature film, "Catching Up," is about a disabled man falling in love with a nondisabled woman, and he was deliberate about presenting the characters matter-of-factly.

"We showcase their unique physicality while also treating them like regular people," he says. "Although the hero struggles with feeling ashamed of his body, the film doesn't reflect that shame in its approach. My hope is that this sends the message that there's nothing wrong with acknowledging our physical differences as a fact of life, but we also don't need to dwell on them or feel embarrassed."

Regular consumption of that type of media, rather than the kind that's truly positive (scroll to Seeing the positive, below), can naturally make people with neuromuscular disease feel conflicted and negative about their bodies, even when the depictions are supposedly affirmative or upbeat.

But ultimately, feeling comfortable in your body is a personal, lifelong journey, and it's important to navigate it using your feelings and instincts as a guide, suggests Quanetta Holt, of Sierra Vista, Arizona.

Quanetta, her two daughters, a sister, and her mother all live with Bethlem myopathy, which causes stiff joints and weakness in the arms and legs and, sometimes, skin abnormalities. The prevalence of the condition in her family has shown her that not everyone with a neuromuscular disease looks alike or has the same challenges. For example, Quanetta can walk but deals with skin conditions and hair loss related to her disease. Her sister has had more muscle weakness and uses a wheelchair.

Quanetta's youngest daughter, Queen, struggled socially after being diagnosed at age 13, but she began to thrive after going to modeling classes.

"I'm an advocate for my daughter, but also for myself," says Quanetta. "I know what it's like to get teased for my looks, and I shaved off the rest of my hair at age 46 as a way to stand up for myself. I used to hide what was happening with my body, but now I embrace it. Personally, I think I rock being bald. Now, I feel like nothing can stop me."

That self-assurance comes through in Queen, too. Now 16, her modeling career is growing, and with every shoot she's learning to be more comfortable in her body.

"Having my condition used to feel harder, but I chose to put all that energy into modeling and just saying, this is who I am," Queen says. "What you think about yourself and how you see your body is going to show. I decided that I wouldn't change how I am, and that's what I'm bringing into the world."

It's not easy to find nuanced, complex, or empowering depictions of people with disabilities in the media. These are a good starting point.

Elizabeth Millard is a freelance writer in northern Minnesota.