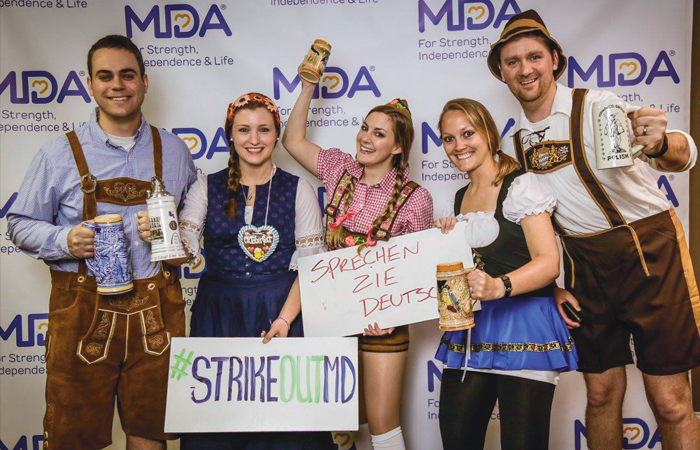 That summer opened his eyes. “When I had a chance to do things with the campers, I saw that they’re just like anybody else: They want to have fun, do projects, play games and crack jokes,” says Salzwedel. “I saw the impact [camp] had on these kids, but I don’t think they realized the impact it had on me.”

He volunteered again after his freshman year at the University of Wisconsin–Oshkosh, but in 2008, after his sophomore year, he wasn’t able to attend because of work. “But I knew I could make a difference,” he says. “I love bowling, and I thought, ‘I could do a bowl-a-thon.’”

That year, he planned and hosted the first annual Oshkosh MDA Bowl-A-Thon. Salzwedel gathered his friends and fellow students and filled about 10 lanes with bowlers, raising $938 for MDA. Since then, the Bowl-A-Thon has exploded, more than doubling its fundraising in the second year and reaching about $22,000 in 2017. Salzwedel estimates that they’ve had close to 200 bowlers each of the last few years, making it the largest bowl-a-thon in Wisconsin. And, in total, the Bowl-A-Thon has raised more than $117,000 for MDA research and support programs.

“When I started this, being involved at UW-Oshkosh, I had lots of friends who helped spread the word to get their groups to come out and bowl,” he says. “It has grown tremendously since then. We have people come from different states, and for some, it’s almost like an alumni event.”

Now, the event includes a pre-celebration at a local bar the night before, a raffle during the event that raises more money for MDA, and multiple sponsorships. Local MDA families also join in on the fun, and Salzwedel hosts a dinner for them after the event. Now that he lives 90 miles north of Oshkosh in Madison, planning the event isn’t easy, but his passion for MDA and fundraising keeps it going.

“I try to drive up once a month to meet with our planning committee to make the Bowl-A-Thon as successful as it can be,” says Salzwedel. “It’s something I love, and to know that after 10 years we’ve raised more than $100,000, with literally blood, sweat and tears going into it, it’s a great feeling.”

Fundraise Your Way for MDA

From hosting a bowl-a-thon to planning a bake sale, you can fundraise your way to help kids and adults living with muscular dystrophy. We’ll give you the tools to make the fundraiser a success and cheer you on every step of the way. Get started today!