Imagine being in a strange city. You’re driving to the airport to catch a flight. Now suppose every street sign and traffic light you see is covered in paint. Which way do you turn? You look at your dashboard. All the indicators are covered in paint, too. Is the tank full or empty? Is the engine hot? Should you go faster? Slower? Or stop altogether?

The truth is you simply don’t have the information you need to proceed safely and get to your destination.

That’s a little like trying to help kids and adults affected by neuromuscular diseases without the benefit of very important tools called biomarkers. Biomarkers — including measurements such as blood pressure, heart rate or the presence of particular proteins in the blood or urine — are biological indicators or measurements that tell us about someone’s health or the progression of a disease.

Biomarkers can provide crucial information for researchers conducting clinical trials, helping them determine at the earliest possible point in the process whether a treatment is effective. As such, MDA is strongly committed to advancing research to find and utilize specialized biomarkers that will accelerate progress for the families MDA serves.

In 2014, MDA awarded Stephen J. Kolb, M.D., Ph.D., an assistant professor in the departments of neurology and biological chemistry and pharmacology at Ohio State University, a human clinical trial grant as supplemental funding for an NIH study comparing infants with and without spinal muscular atrophy (SMA).

“We are studying how SMA progresses during the first two years of life and comparing that to how healthy infants develop,” says Kolb. “In addition to measuring motor function, we are measuring potentially useful biomarkers that may accelerate and improve clinical trials in SMA.”

Although the study focuses on infants, Kolb believes it may yield information applicable to older children and adults with SMA.

“With our data, investigators who are running and designing clinical trials in infants with SMA may be able to shorten the time it takes to determine if a therapy is really working or not,” says Kolb. The study is expected to finish in spring 2016.

Research funded by MDA has shown that abnormal production of a protein called DUX4 is a major molecular cause of facioscapulohumeral muscular dystrophy (FSHD). 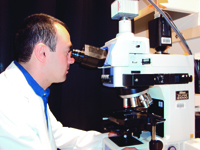 In 2011, MDA awarded a development grant to Fedik Rahimov, Ph.D., a postdoctoral research fellow at the program in genomics at Harvard Medical School and Boston Children’s Hospital, to support his work seeking to further illuminate the molecular mechanisms underlying FSHD. That included looking at destruction that occurs in FSHD that may be due to activity of other genes set in motion by DUX4.

“Genes that are induced by DUX4 are those that likely play a role in disease initiation and progression in FSHD,” says Rahimov. “These genes could serve as disease biomarkers as well as targets to develop new therapies.”

Using muscle samples collected from more than 20 families, the study identified several genes that can be used as muscle biomarkers for FSHD.

“Genes that are either significantly up- or downregulated in affected muscles relative to control muscles could serve as potential disease biomarkers,” Rahimov adds. ”Such biomarkers tend to be more accurate and can be used to develop therapies and monitor the success of these therapies in preclinical and clinical trials.”

Michael Benatar, MBChB, M.S., DPhil, chief of the neuromuscular division and professor of neurology at the University of Miami, Miller School of Medicine, has received past funding support from MDA for his research seeking biomarkers in ALS. His work focuses on collecting critical data from individuals who are at risk for ALS due to genetic factors but who have not yet shown clinical symptoms. The ongoing study uses comprehensive testing ranging from blood samples to magnetic resonance imaging.

Finding subjects for the study who are at risk for ALS but not yet symptomatic required Benatar and colleagues to seek out individuals with the familial (inherited) form of the disease. However, Benatar believes his work will have implications for the larger ALS population, both those with the familial and sporadic (noninherited) forms of the disease. He’s seeking biomarkers that can both predict disease onset and monitor progression.

Benatar says: “We’ve been interested in studying people before they develop the disease, to understand such things as: When does that disease begin? How does it unfold? How does it progress? And are there opportunities to intervene early?”

“If we can figure out ways to identify early disease or people at risk for disease, I think that offers a really unique opportunity for early therapeutic intervention or even disease prevention,” says Benatar, who also co-directs the Kessenich Family MDA/ALS Center at the University of Miami.

The FDA issued a report in June titled “Targeted Drug Development: Why are Many Diseases Lagging Behind?” which emphasized that, for many rare diseases, the molecular and genetic underpinnings are not sufficiently understood to allow effective therapeutic intervention. Part of this challenge, the report said, involves the need for more and better biomarkers that can help make clinical trials more efficient and successful.

As part of MDA’s national advocacy effort, and in response to an FDA request posted in the Federal Register, MDA collaborated with the Friedreich’s Ataxia Research Alliance (FARA) and Cure SMA to provide the FDA with a report on the current state of research pertaining to biomarkers in neuromuscular diseases.

“The FDA appreciates that biomarkers are critical and is seeking information about which biomarkers could be good candidates for validation, which we’re glad to provide,” says Kristin Stephenson, MDA vice president of policy and advocacy.

“We are deeply committed to working with government agencies and our friends at other nonprofit organizations to optimize awareness of the crucial importance of biomarkers across the full spectrum of neuromuscular diseases — and we appreciate that the FDA has invited the community to weigh in on this important topic,” Stephenson continues.

In addition to the four new MDA research grants aimed at discovering biomarkers in DMD, promising research into biomarkers is also taking place in Friedreich’s ataxia (FA), inclusion-body myositis (IBM) and other diseases across the neuromuscular disease spectrum.

As MDA’s Pavlath notes: “Biomarkers hold huge potential, from enabling earlier detection and better treatment to streamlining the drug discovery process so that lifesaving therapies will be found more quickly for the families we serve.”

Phil Ivory is MDA’s senior writer for the Communications and Marketing team.